Giethoorn in the
Netherlands

Giethoorn is a cute Dutch village in the Netherlands. There are no roads in the village center. So, instead of using cars and roads, the locals and tourists of Giethoorn village use mostly waterways to transport themselves in Giethoorn village. Therefore, a comparison with the Italian Venice is often quickly made. Just like in real Venice, you do almost everything here by boat. However, the gondola in Giethoorn village is called a 'punter'. And, the gondolier with paddle has been replaced by a modern whisper motor. It is also possible to hire a punter and propel yourself the old fashioned way with a paddle.

Nickname: Venice of the North

As mentioned, the Dutch village owes its nickname "Dutch Venice" to the many canals and exact 176 bridges the village has. But, you should emphasize "Dutch" because in Giethoorn you will not find San Marco square or Canal Grande. Another big difference is the prices for a drink or ice cream. In fact, these are a lot lower in the Dutch Venice compared to the Italian example.
Giethoorn village is not the only place nicknamed Venice of the North. Cities such as, Saint Petersburg, Bruges and Amsterdam are also called that way.

The roof thatched cottages in the village center are actually inhabited by people. The residents are known to be tolerant, but, don't test that. So, keep in mind that you cannot just go anywhere and that there are actually private areas.

You can even spend the night in Giethoorn, for average prices that are normal in the Netherlands. There are multiple hotels in Giethoorn, campsites, camperpitches and even a hostel provide a varied offer. 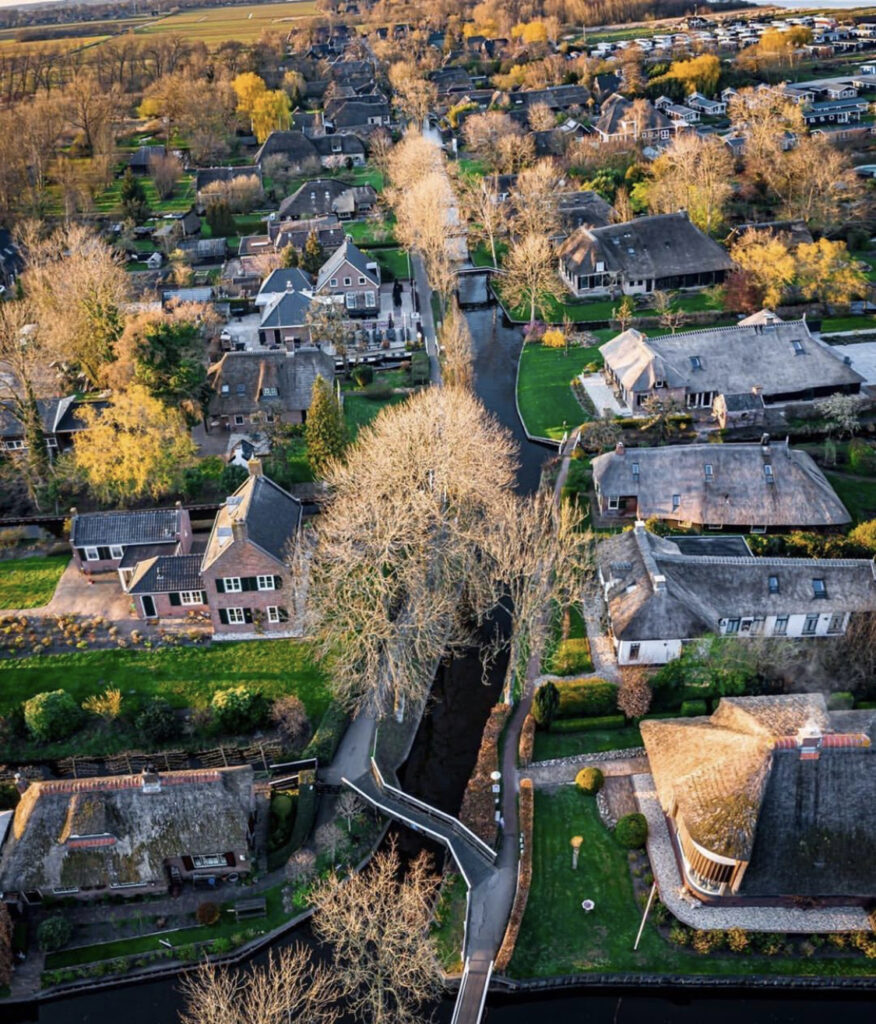 The village was created 800 years ago by manually searching for peat. In fact, the locals at that time dug by hand and created a complete channel system. In conclusion, with all this  digging all islands were  created. After that, these islands have been connected  by 176 walking / cycling bridges and the current thatched houses were built on those islands. With all this work they created Giethoorn village.

At that time, a 'punter' boat was used to transport everything. The 'punter' boats are among the oldest ships in existence: paintings and deeds from the sixteenth and seventeenth centuries are proof of the existence of the current form and name. Nowadays, these 'punter' boats are still used. Although, they are slowly driven away by electric-powered boats. You can rent a punter at Giethoorn boat rental.

No cars in Giethoorn village

Then, the cars arrived in the Netherlands. But, the old village was not suitable for cars and car traffic. In fact, the locals voted to preserve the old. Therefore, the decision was made to leave the village intact. So, this created the famous car-free zone of the Dutch village. In conclusion, it is not that the locals of Giethoorn cannot afford a car but that they simply cannot park in front of their door. Tips for parking in Giethoorn. Our ancestors probably never expected that all this digging would eventually be the basis for 1 of the bussiest tourist hot spots in the Netherlands. 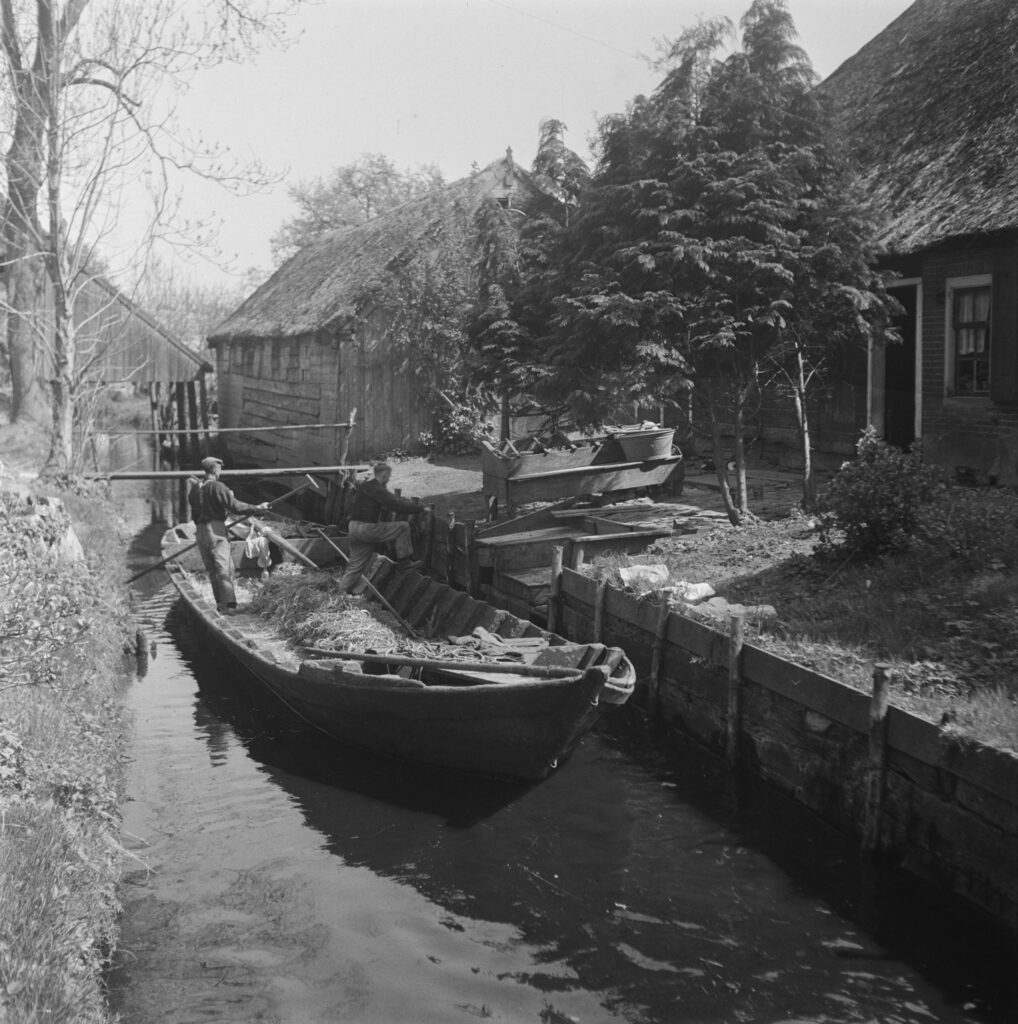 Partly due to the presence of all those canals in Giethoorn, sailing and Giethoorn, go hand in hand. With all kinds of boats, canoes or even sub boards you sail through these canals. If you do not have your own boat, you can also rent 1. Look here on boat rental Giethoorn for availability. We always advise you to reserve a boat in advance.

Residents - 2795 people are living in Giethoorn in 2020
Tourists - Yearly more than 1.000.000 tourists from all over the World are visiting Giethoorn.
When - No mather what the weather is, all year round there are visitors in Giethoorn village.
Monopoly game - On the international Monopoly board our village has a brown color and lies between 'Start' and 'Madrid'.

About 100-200 years ago there was poverty in Giethoorn. so, if you had little money at the time you had your house covered with reeds. In fact, it's the other way around now. In other words, placing roof tiles on a house is now cheaper than having it covered with thatch. However, residents of Giethoorn village are happy to stick to the tradition of the roof thatched houses. Therefore, they renew their roofs every 40 years. 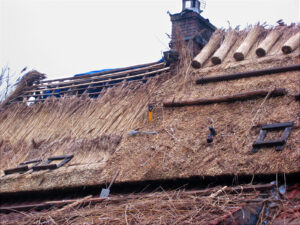 Residents giethoorn are not racist

At the beginning of 2022, it came out via the Dutch TV program 'Zembla' that a (Turkish) family from Giethoorn was being bullied. Through that same TV program it came out that this family, was discriminated against and terrorized by a number of local youths. This is not justifiable! The day after the TV broadcast, the young people in question apologized to the (Turkish) family. It was also suggested in the media that everyone in Giethoorn would be racist. This is absolutely not true!