As three residents of Giethoorn in the Netherlands, we created this website. Firstly, to show you what our live is like in Giethoorn. Secondly, to introduce the future visitors to Giethoorn to our beautiful village. Thirdly, to show that the 1 million people who visit Giethoorn every year, sometimes also have a downside. For us Giethoorn is an authentic Dutch village where people can really be themselves. Find out more about us and our vision.

My name is Dirk Walker. Together with my family I have been living in Giethoorn for 26 years. After studying history in Amsterdam, I worked for 17 years as a Dutch history teacher at a school in Rotterdam. In the middle of my midlife crisis, I decided to leave Rotterdam and move to Giethoorn in the Netherlands. In fact, a world of difference at the time. Living in Giethoorn is the most beautiful thing there is.

After a number of informal jobs, I started a company that introduced small groups of foreign tourists to the Netherlands. That's how I showed thousands of people the Netherlands. Some even for the fourth time. Partly because of this, I started a travel organization years ago with 2 partners. Our company specializes in guided tours in the Netherlands for groups up to 21 people. My motto is: a day not laughing is a day that is not lived. We also have a Giethoorn boat rental company. 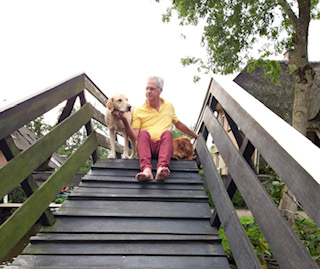 “We believe that the huge numbers of visitors eventually can destroy the soul of our authentic Dutch village. As over tourism influences the ability of residents to enjoy daily life. As a result, the streets feel less inhabited. In fact, even the tourists sometimes complain that they only see other tourists.”

Everything used to be better

Everything used to be better. My grandfather said that to us and we now to our children. In fact, our children say this to their children again. Often we hear this back when we speak to (older) residents of Giethoorn in the Netherlands.

How did Giethoorn become so popular?

Was it all better now? We'll take you back in time. In 1958 the Dutch film fanfare was released. This film was shot in Giethoorn and is considered one of the milestones of Dutch film history. From 1958 onwards the Dutch came to peek into Giethoorn on weekends and holidays. As a result, a day at Giethoorn was part of your Dutch upbringing. In fact, this is still the case. In the 1990s, belgians and Germans were also increasingly visiting.

Until we ended up in the social media age. As a result, a lot of advertising was (perhaps inadvertently) made for Giethoorn in the Netherlands. Every year the crowds in Giethoorn increase. So, now there are also tourists outside the weekend and Dutch holidays.

Authenticity VS commercial interests in Giethoorn

Nice for us as entrepreneurs in Giethoorn. But, less liked by the residents of Giethoorn. So, the question is: is this proces still reversible? As a result, the people of Giethoorn could say that everything is better than before.

“We believe that this cannot go on. But, we also realize that the economic importance of the region must be taken into account. So, we are not going to turn the tide with just the three of us. Together with you we want to make a try.”

Our activities in Giethoorn

One of the things to do when you are in Amsterdam, is visiting Giethoorn. Meet Giethoorn through our Dutch travel company Giethorn. We bring people to Giethoorn all year round. The 3 owners of this company live and work in Giethoorn. As residents of this beautiful Dutch village, we therefore have a lot of knowledge about Giethoorn. We organize trips to Giethoorn from Amsterdam for groups of 2 to 29 people. We go for the unforgettable experience and assume that you can make your friends enthusiastic about Giethoorn at home. A lunch, boat trip and an overnight stay at the Giethoorn hotel are optional. We transport you with:

To really discover our village, you need a boat to sail around and feel like a local. Boat rental Giethoorn also rents boats in Giethoorn. We rent a number of boats for every budget. The smallest and cheapest boat is of the 'whisper boat' type. These are suitable for 2 to 4 people and the costs start at €17.50 per hour. You can also rent a slightly more comfortable sloop from us. These are for 4 to 8 people and these costs start at € 25.00 per hour. It is also possible to rent a canoe or a supboard.

For a fee we also sail around with our customers. For these private cruises in Giethoorn we use a luxury sloop. This boat from Giethorn is suitable for 2 to 12 people. As a customer you come to beautiful places, where the average tourist will never end up.

Spend the night in giethoorn

Optional is a photo shoot led by a well-known instagrammer.

Residents giethoorn are not racist

At the beginning of 2022, it came out via the Dutch TV program 'Zembla' that a (Turkish) family from Giethoorn was being bullied. Through that same TV program it came out that this family, was discriminated against and terrorized by a number of local youths. This is not justifiable! The day after the TV broadcast, the young people in question apologized to the (Turkish) family. It was also suggested in the media that everyone in Giethoorn would be racist. This is absolutely not true!